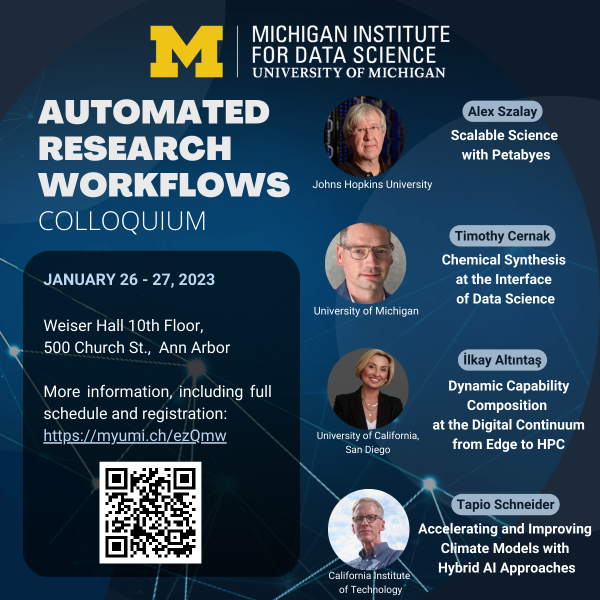 Significant advancements in scientific computing, Artificial Intelligence (AI), and the hardware and software research environment are enabling researchers to develop automated research workflows (ARWs): building AI and machine learning (ML) as components in the research workflow for data processing and analytics, and using these methods to design and monitor experiments. As stated in a recent report from the National Academies of Sciences, Engineering and Medicine, “the tools and techniques being developed under the large umbrella of ARWs promise to transform the centuries-old serial method of research investigation into processes in which thousands or even millions of simulations or experiments are iterated rapidly in closed loops, with the analysis of data and even the design of experiments or controlled observations being assisted by ML or optimization techniques. Simultaneously, ARWs provide a way to satisfy pressing demands across fields to increase interoperability, reproducibility, replicability, and trustworthiness by better tracking results, recording data, establishing provenance, and creating more consistent metadata than even the most dedicated researchers can provide themselves.”

This colloquium gathers experts who are leading this trend nationwide. They will present their vision as well as their work developing and employing ARWs in astronomy, chemical biology and environmental science. In addition, we will organize a roundtable session with U-M faculty members and the speakers, to discuss the potential of ARWs in various research domains, develop significant ideas and build collaboration to pursue these ideas.

She is the Founding Director of the Workflows for Data Science (WorDS) Center of Excellence, which develops methods, cyberinfrastructure, and workflows for computational data science and its translation to practical applications. She is also the Founding Director of the WIFIRE Lab, which uses AI methods to build an all-hazards knowledge cyberinfrastructure and has achieved significant success in helping to manage wildfires.

Tim Cernak was born in Montreal, Canada in 1980. He obtained a B.Sc. in Chemistry from University of British Columbia Okanagan and there studied the aroma profile of Chardonnay wines. Following PhD training in total synthesis with Prof. Jim Gleason at McGill University, Tim was a FQRNT Postdoctoral Fellow with Tristan Lambert at Columbia University. From 2009–2018, Tim worked with the Medicinal Chemistry team at Merck Sharp & Dohme in Rahway and Boston. In 2018, Dr. Cernak joined the Department of Medicinal Chemistry at the University of Michigan in Ann Arbor as an Assistant Professor. The Cernak Lab is exploring an interface of chemical synthesis and data science. Tim is a co-Founder of Entos, Inc.

His work has elucidated how rainfall extremes change with climate, how changes in cloud cover can destabilize the climate system, and how winds and  weather on planetary bodies such as Jupiter and Titan come about. He is currently leading the Climate Modeling Alliance (clima.caltech.edu), whose mission is to build the first Earth system model that automatically learns from diverse data sources to produce accurate climate predictions. He was named one of the “20 Best Brains Under 40” by Discover Magazine, a David and Lucile Packard Fellow, an Alfred P. Sloan Research Fellow, and fellow of the American Geophysical Union; he is the recipient of the James R. Holton Award of the American Geophysical Union and of the Rosenstiel Award of the University of Miami.

Alexander Szalay is the Bloomberg Distinguished Professor at the Johns Hopkins University, with a joint appointment in the Departments of Physics and Astronomy and Computer Science. He is the Director of the Institute for Data Intensive Science and Engineering (IDIES). He is a cosmologist, working on the statistical measures of the spatial distribution of galaxies and galaxy formation. He has been the architect for the archive of the Sloan Digital Sky Survey. He is a Corresponding Member of the Hungarian Academy of Sciences, and a Fellow of the American Academy of Arts and Sciences. In 2004 he received an Alexander Von Humboldt Award in Physical Sciences, in 2007 the Microsoft Jim Gray Award. In 2008 he became Doctor Honoris Causa of the Eotvos University, Budapest. In 2015 he received the Sidney Fernbach Award of the IEEE for his work on Data Intensive Computing. In 2020 he was awarded the Victor Ambartsumyan International Prize for his work in Physical Cosmology. In 2021 he was a member of the team receiving the ASM SIGMOD Systems prize for their work on the SDSS Archive. In 2021 he was one of the winners of the International Falling Walls Prize in Life Sciences for his work on cancer.
Astronomy
1085 S. University
323 West Hall
Ann Arbor, MI 48109-1107
astroweb@umich.edu
734.764.3440
734.763.6317
Sitemap
Facebook