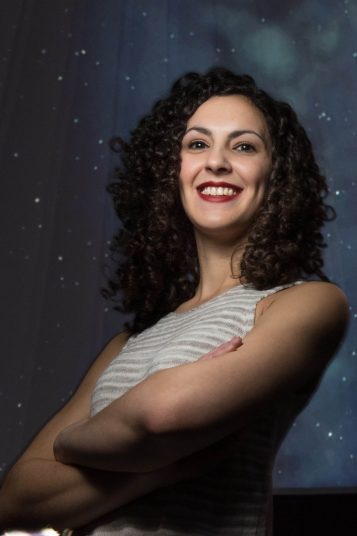 PhD Research: During her time at the University of Michigan, Vivienne Baldassare studied supermassive black holes at the centers of dwarf galaxies. She used data from the Magellan telescopes to search for signatures of black holes consuming material at a vigorous rate. By identifying these elusive objects and studying their properties, she hopes to learn more about how black holes and galaxies grow together over cosmic time.

Exciting Discovery: Baldassare and her advisor discovered the smallest black hole ever observed at the center of a galaxy. Every large galaxy, including our own Milky Way, is believed to have a supermassive black hole at its core. The object discovered by Baldassare and her advisor is one of the first to be identified in a dwarf galaxy. The findings illuminate for astronomers important similarities between galaxies of vastly different scales. And because the dwarf galaxy, called RGG 118, is so small, it’s unlikely that it has ever merged with other galaxies, so it gives researchers a window to a younger universe.

Valuable Experience: “Grad students are valued and supported at Michigan. You’re not only encouraged and given the skills to become an independent researcher, you’re given the valuable experiences and access to resources and facilities to really make it happen.”