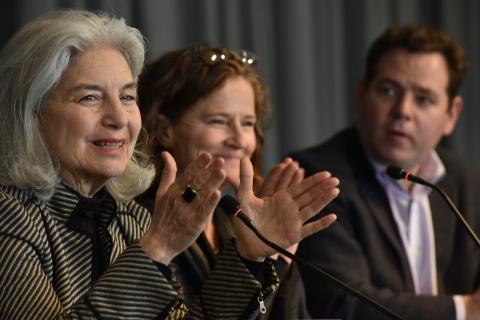 From her office at the National Committee for United States-China Relations, Jan Berris has overseen the US-China relationship, from the earliest visit of China's ping-pong team in 1972 to the congratulatory letters that both Joe Biden and Xi Jinping sent to NCUSCR's anniversary gala this year. Jan will talk about the arc of the two countries' relationship and how it might change in the future - and about how her U-M education equipped her to help it develop.

Jan Berris is Vice President of the National Committee on US-China Relations. Beginning with the committee in 1971, Jan Berris has been a program associate, moving on to program director, and then vice president of the NCUSCR. She is responsible for overseeing all program activities of the Committee, being actively involved in the preparation and operations for the visits to the US of hundreds of Chinese delegations (including the 1972 Chinese Ping Pong Team, the first PRC group to come to this country), and sending hundreds of American delegations to China. At the request of the State Department, she coordinated Chinese press activities during Premier Deng Xiaoping's February 1979 visit to the United States, and has been the lead for the Committee’s hosting of major welcoming events for all of the senior-most Chinese leaders.

Ann Lin
Ann Chih Lin is Director of the Lieberthal-Rogel Center for Chinese Studies and Associate Professor of Public Policy in the Gerald R. Ford School of Public Policy at the University of Michigan. She co-created the Ford School’s global experience program on China and has actively fostered relationships between the Ford School and schools of public policy and public administration in China. Her current work examines international variations in the assignment of blame for the COVID-19 pandemic, as well as racial and ethnic difference in the experience of the pandemic in the United States. Professor Lin is also working on a study of interventions designed to reduce bias against Muslims and on the scapegoating of immigrant groups in the name of US national security.

Nicholas Howson
Nicholas Calcina Howson, the Pao Li Tsiang Professor of Law, is a former partner of Paul, Weiss, Rifkind, Wharton & Garrison LLP who worked out of the firm's New York, Paris, London, and Beijing offices, finally as a managing partner of the firm's Asia Practice based in the Chinese capital. He has spent many years living in the People's Republic of China (PRC), both as a scholar and as a practicing lawyer based in Beijing. Professor Howson writes and lectures widely on Chinese law topics, focusing on Chinese corporate law and securities regulation, the Chinese capital markets, Chinese legal history, and the development of constitutionalism in Greater China.
Asian Languages and Cultures
Suite 6111
202 South Thayer Street
Ann Arbor, MI 48104-1608
um-alc@umich.edu
734.764.8286
Sitemap
Facebook Twitter