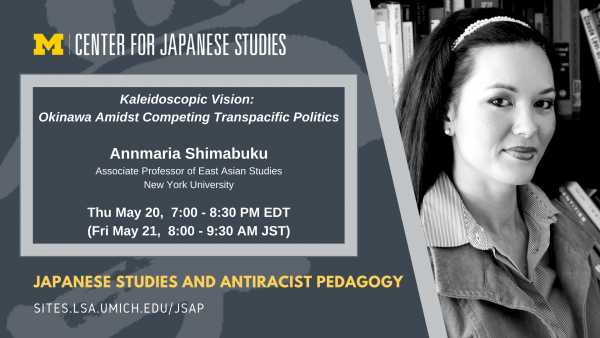 Advance registration for this Zoom webinar is required:
https://umich.zoom.us/webinar/register/WN_sCvvNSW5TpW6miJZxLtg7w

In the Asia Pacific, the Ryukyu Kingdom was a major trading nation during the early modern period and Okinawa was the “Keystone of the Pacific” that served as a launching pad for America’s Cold War during the postwar era. The Satsuma domain invaded the Ryukyus in 1609 and turned it into a “hidden colony” vis-a-vis Ming/Qing China so that it could continue to funnel Chinese goods and culture into its domain via the Ryukyus without offending either China or the Tokugawa bakufu’s “closed country” (sakoku) policy. After the newly established Meiji government invaded the Ryukyu Kingdom and annexed it as Okinawa Prefecture in 1879, it once again kept it as a “hidden colony” vis-a-vis the international community. Today, modern Japan, and now also the US, continue to hide Okinawa’s colonial condition in order to concentrate US military bases on the islands in the interests of both.

Ifa Fuyū (1876-1947), the “father of Okinawan studies,” argued that Ryukyuan political and cultural life peaked in the 16th century when it could openly dazzle with the kaleidoscopic brilliance of all cultures that touched the lives of the Ryukyuan people. However, from the 17th century forward, Okinawa could only be seen in the ever shifting shadows of a constellation of moving sovereign states. Its dynamism—its “doubleness”—has been routinely flattened out into a singularity that is consumed by surrounding sovereign powers. This can be seen in Okinawa’s modern-day postcolonial predicament of a concentrated US military base presence that is enabled by the popular will of the Japanese people. For American statesmen, Okinawa is simply “one part of Japan” and therefore not a US problem, and for more progressive politics, Okinawa is victim to US (military) imperialism and white supremacy. For Japanese statesmen, Okinawa is simply ignored, and for more progressive politics, Okinawa is again victim to US (military) imperialism and white supremacy. However, Okinawans have recently been problematizing the fact that it is the Japanese government who funds the US military bases and decides to concentrate them in Okinawa, and the will of the Japanese people who are happy with this arrangement that guarantees Japanese economic and political stability.

Hence, when thinking of Okinawa transpacifically, which Okinawa do we prioritize? The Okinawa in the shadows of the US, or the Okinawa in the shadows of Japan? In this webinar, I will put Ifa in conversation with his contemporary W.E.B. Du Bois to imagine a global politics of the color line in which doubleness is not suppressed but becomes a driving liberatory force for what Ifa called an “age of sweetness” (ama yū) after colonialism.

Annmaria Shimabuku is the Director of Graduate Studies and Associate Professor at NYU. Her research is centered in the intersection of postcolonial Japanese Studies, Okinawan Studies, and literary/political theory.