Chinese Railroad Workers, The Transcontinental, and the Making of Modern America 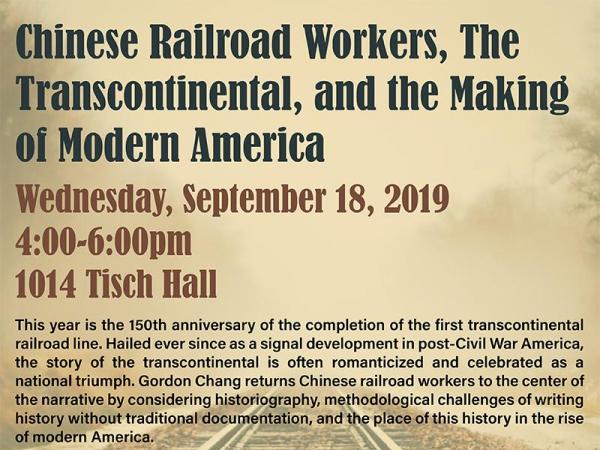 This year is the 150th anniversary of the completion of the first transcontinental railroad line. At Promontory Summit, Utah on May 10, 1869, the Central Pacific and Union Pacific Railroad lines celebrated the spanning of the country with iron. Hailed ever since as a signal development in post-Civil War America, the story of the transcontinental is often romanticized and celebrated as a national triumph. Relegated to the margins or even erased altogether from many accounts, Chinese railroad workers were actually central to the effort. Chang’s historical recovery returns these workers to the center of the narrative. His lecture will consider historiography, the methodological challenge of writing history without traditional documentation, and the place of this history in the rise of modern America.


Gordon H. Chang is professor of history, Olive H. Palmer Professor in the Humanities, and the Senior Associate Vice Provost for Undergraduate Education at Stanford University. He studies the histories of America-China relations, U.S. diplomacy, and Asian American history. Among his publications are Friends and Enemies: The United States, China, and the Soviet Union, 1948-1972; Morning Glory, Evening Shadow: Yamato Ichihashi and His Internment Writing, 1942-1945; Asian Americans and Politics: Perspectives, Experiences, Prospects; editor with Judy Yung and H.M Lai, Chinese American Voices: From the Gold Rush to the Present; editor with Mark Johnson and Paul Karlstrom, Asian American Art: A History, 1850-1970; and Fateful Ties: A History of America’s Preoccupation with China. He has been a Guggenheim and ACLS Fellow.