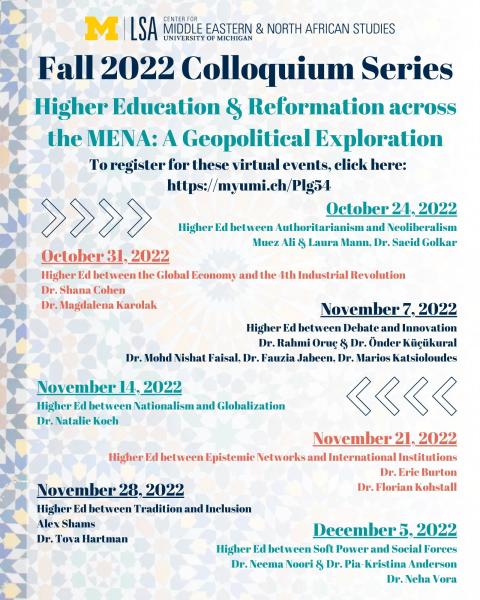 Neema Noori & Pia-Kristina Anderson: Exporting the American Model of Education to the Gulf

In the current context of globalization, social scientists have examined the mechanisms by which organizational practices are transferred when transnational corporations establish subsidiaries in other countries. Comparatively little work, however, has been done on the challenges of transplanting, from one cultural and political context to another, an institution of higher education or a particular model for how higher education should be practiced. Our talk will focus on the political, economic, and cultural challenges of exporting the “American model of education” to the Arab States of the Gulf.

Teach for Arabia offers an ethnographic account of the experiences of students, faculty, and administrators in Education City, Qatar. Education City, home to the branch campuses of six elite American universities, represents the Qatari government's multibillion-dollar investment over the last two decades in growing a local knowledge-based economy. Though leaders have eagerly welcomed these institutions, not all citizens embrace the US universities in their midst. Some critics see them as emblematic of a turn away from traditional values toward Westernization. Qatari students who attend these schools often feel stereotyped and segregated within their spaces. Neha Vora considers how American branch campuses influence notions of identity and citizenship among both citizen and non-citizen residents and contribute to national imaginings of the future and a transnational Qatar. Looking beyond the branch campus, she also confronts mythologies of liberal and illiberal peoples, places, and ideologies that have developed around these universities. Supporters and detractors alike of branch campuses have long ignored the imperial histories of American universities and the exclusions and inequalities that continue to animate daily academic life. From the vantage point of Qatar, Teach for Arabia challenges the assumed mantle of liberalism in Western institutions and illuminates how people can contribute to decolonized university life and knowledge production.

Neha Vora is a professor of anthropology in the Department of Anthropology & Sociology at Lafayette College. Her research and teaching interests include diasporas and migration, citizenship, higher education, gender, liberalism, political economy, and human-nonhuman encounters in the Arabian Peninsula region and in the United States. She is the author of Impossible Citizens: Dubai’s Indian Diaspora (Duke University Press, 2013) and Teach for Arabia: American Universities, Liberalism, and Transnational Qatar (Stanford University Press, 2018). She has also published a co-authored book with Ahmed Kanna and Amelie Le Renard, Beyond Exception: New Interpretations of the Arabian Peninsula (Cornell University Press, 2020).

Pia-Kristina Anderson has taught at the American University in Cairo and the University of California at Santa Cruz. Her research and teaching areas include culture contact, anthropological history, archaeology, cultural geography and the formation of identity. Anderson has extensive fieldwork experience both in the Middle East and in the Pacific Islands, among other regions.

Neema Noori is a professor in the Department of Anthropology, Psychology, and Sociology at the University of West Georgia. He received his PhD in sociology from Columbia University in 2006. After completing his dissertation, Noori taught for three years in the Department of International Studies at the American University of Sharjah in the United Arab Emirates. He joined the Department of Sociology at the University of West Georgia in 2008. Noori's areas of interest include political sociology, global higher education governance, knowledge networks, and state formation. To date, his research has followed two trajectories. The first builds on his dissertation and is focused primarily on NGO and government development policy in Post-Soviet Central Asia. The second trajectory expands his regional specialization to include the Arab states of the Persian Gulf. Partly in response to witnessing the proliferation of American-style universities in the Middle East, he has written several articles on the diffusion of the American model of higher education throughout the region.

Register to the virtual event: https://myumi.ch/AwV8e

---
If there is anything we can do to make this event accessible to you, please contact waterbuk@umich.edu. Please be aware that advance notice is necessary as some accommodations may require more time for the university to arrange.
Anthropology
101 West Hall
1085 S. University Ave.
Ann Arbor, Michigan 48109-1107
michigan-anthro@umich.edu
734.764.7274
734.763.6077
Sitemap
Facebook Twitter Youtube