The Roy A. Rappaport Lectures: "Patagonian Prehistory: Human Ecology and Cultural Evolution in the Land of Giants"

"Explorers of an Empty Landscape" by Professor Raven Garvey 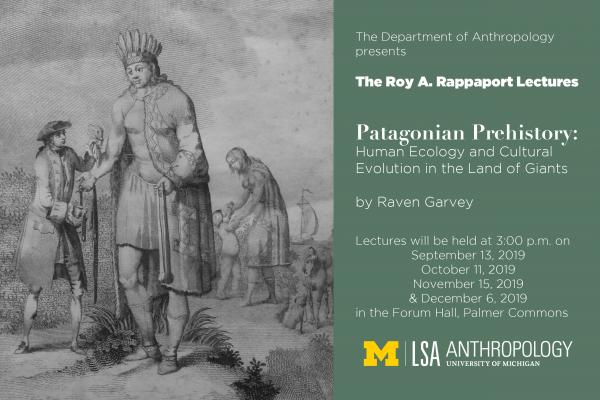 "Initial colonization of the Americas is one of the most hotly-debated topics in archaeology. Patagonia is the farthest place to which colonizers traveled from the east Siberian point of entry and, so, should be central to hypotheses regarding migration speed, a particularly controversial aspect of the colonization process. In this talk, Garvey describes historical reasons for Patagonia’s curious absence from mainstream discussions, and presents unconventional evidence that supports a relatively slow migration through the Americas."

This lecture series presents a book manuscript titled Patagonian Prehistory, Human Ecology and Cultural Evolution in the Land of Giants. Following an introduction to the region and some of its archaeological puzzles, Dr. Raven Garvey will describe novel hypotheses related to colonization, abandonment, and meeting basic needs in a region widely considered marginal for human habitation. In particular, this series will examine unconventional evidence for gauging colonization speed, alternative explanations for a purported abandonment of the region between 8000 and 4000 years ago, and reasons Patagonians might have remained foragers despite farming-favorable conditions.


The Roy A. Rappaport Lectures are a series of lectures on a work in progress, designed both as free public lectures and as a special course for advanced students to work closely with a faculty member in the Department of Anthropology on a topic in which the instructor has an intensive current interest. As the description written by Professor Roy “Skip” Rappaport in 1976 states, “…it offers the opportunity for other students and faculty to hear a colleague in an extended discussion of their own work.”
Anthropology
101 West Hall
1085 S. University Ave.
Ann Arbor, Michigan 48109-1107
michigan-anthro@umich.edu
734.764.7274
734.763.6077
Sitemap
Facebook Twitter Youtube