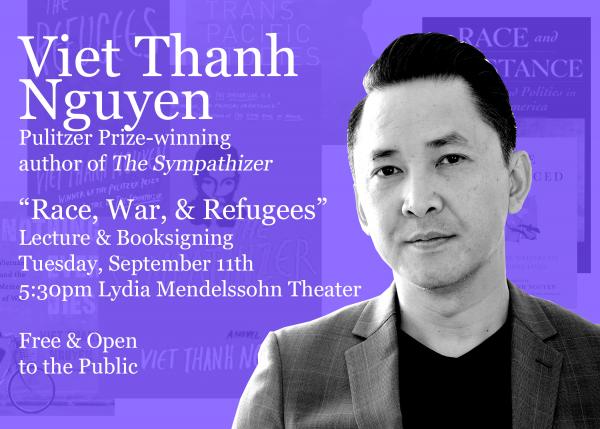 Reading and Lecture: Professor Viet Thanh Nguyen, winner of the Pulitzer Prize for fiction, will visit the University of Michigan on Tuesday, September 11, 2018, to deliver a lecture on the topic of "Race, War, and Refugees.” He will discuss and read from the four books that he has written in the last four years: The Sympathizer; Nothing Ever Dies: Vietnam and the Memory of War; The Refugees; and The Displaced: Refugee Writers on Refugee Lives, all of which will be available for purchase at the book-signing that follows the lecture.

The anniversary of 9/11 provides the ideal occasion for Professor Nguyen to speak on these issues that are at the forefront of public consciousness. With the nation in the midst of a harsh and divisive debate about borders and migration, Professor Nguyen provides a unique and insightful perspective to promote tolerance, empathy, and forward-looking solutions. His lecture will fuse together elements of his creative writing, autobiographical reflection, and scholarly criticism.

About the Speaker: Viet Thanh Nguyen’s novel The Sympathizer is a New York Times best seller and won the 2016 Pulitzer Prize for Fiction. Other honors include the Dayton Literary Peace Prize, the Edgar Award for Best First Novel from the Mystery Writers of America, the Andrew Carnegie Medal for Excellence in Fiction from the American Library Association, the First Novel Prize from the Center for Fiction, a Gold Medal in First Fiction from the California Book Awards, and the Asian/Pacific American Literature Award from the Asian/Pacific American Librarian Association. His other books are Nothing Ever Dies: Vietnam and the Memory of War (a finalist for the National Book Award in nonfiction and the National Book Critics Circle Award in General Nonfiction) and Race and Resistance: Literature and Politics in Asian America. He is University Professor, Aerol Arnold Chair of English, and Professor of English, American Studies and Ethnicity, and Comparative Literature at the University of Southern California. He has been interviewed by Tavis Smiley, Charlie Rose, Seth Meyers, and Terry Gross, among many others. His current book is the bestselling short story collection, The Refugees. Most recently he has been the recipient of fellowships from the Guggenheim and MacArthur Foundations, and le Prix du meilleur livre étranger (Best Foreign Book in France), for The Sympathizer. He is a critic-at-large for the Los Angeles Times and a contributing opinion writer for the New York Times. https://vietnguyen.info/
Anthropology
101 West Hall
1085 S. University Ave.
Ann Arbor, Michigan 48109-1107
michigan-anthro@umich.edu
734.764.7274
734.763.6077
Sitemap
Facebook Twitter Youtube